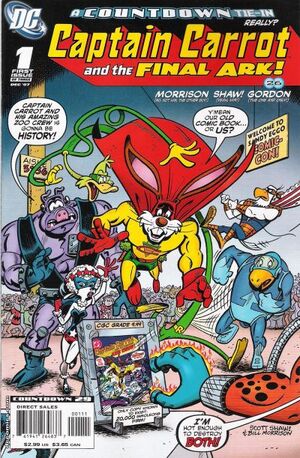 It is a fine day at the city of Sandy Eggo where visitors comes to the Sandy Eggo Comic-Con, where comic book artist Rodney Rabbit is on the DC (Detective Chimp) Comics Panel. Rodney is ask by one of the audience as to why he canceled his greatest running comic book Just'a Lotta Animals. He answers back that the real-life JLA from Earth-C-Minus had hired a over-zealous lawyer in sending a cease and desist letter to Rodney and the staff for copyright infringement, as the JLA technically own the rights to anything on them "throughout the universe." In so Rodney tells the audience that he have have been working on new projects by bringing out new characters, such as Krypto the Superdog and Ace the Bat-Hound.

Meanwhile, the Zoo Crew are pushing out their luck in signing autographs and endorsing in merchandise, but to no avail. Suddenly, a ruckus is happening. Realizing that the Zoo Crew need all the help they can get, Pig-Iron have Fastback to find Rodney as Captain Carrot. Fastback speeds towards to the DC Comics Panel with difficultly through the crowds, but find it vacated before learning from a janitor that Rodney is back in his table in Artist's Valley. Rodney had just arrive at Artist's Valley and learns from his fellow writers about the commotion caused by none other than the Salamandroid. Rodney leaps under his booth and changes into Captain Carrot and joins with the Zoo Crew against Salamandroid. Although the Zoo Crew almost had the initiative over Salamandroid, however, they only bungle up before the villain make his escape into the nearby ocean.

Sometime later, Rodney is alone in his home and narrating to the viewers that following the murder of Little Cheese by Alley-Kat-Abra, everything had dramatically change for the Zoo Crew. After Alley-Kat-Abra was arrested, the Zoo Crew had to overcome their shock over their former member's betrayal and attempted to rescue Fastback, who was sent into the future by Alley. With the help of time traveler Chip Hunter, the Zoo Crew traveled a hundred years in the future and fought the Time Keeper to bring Fastback back to the past. But when they returned to the present, they find their world had changed.

President Mallard Fillmore had resigned in disgrace when it was revealed he bribed Alley to expose the secrets of her team, and Vice President Beneduck Arnold succeeded Fillmore. Played on the fears of the public, Arnold immediately put forth an Anti-Super Hero agenda in which the government no longer supports the Zoo Crew and subsequently turning their headquarters the Z-Building to be sold and turned into retirement condominiums. The Crew officially resisted the Collar ID initiative and refused to sign up, but fought crime on the sly. In their alter-egos, the Crew go on with their lives: Byrd Rentals (Rubberduck) agreed to do a reality TV show featuring him and other washed up actors; Rova Barkitt (Yankee Poodle) became the highest rated talk show host in the business world after she was exonerated of all charges; Pig-Iron put his strength to use by working on an oil derrick; Fastback started his own delivery service; and American Eagle continued his hit radio career as Johnny Jingo, the radio talk show host with two right wings.

Suddenly, the Zoo Crew visit Rodney to cheer him out of his depression. The Crew then want to see what is happening on the news while Rodney is concern of his secret identity is already compromised and the future of the Crew. It is learn on TV that the relations between marine and land animals had been worsening following the lack of civil rights for marine animals and the death of Goldie Fishman from toxic waste which exacerbated into domestic terrorism. On fortunate news, Nepalese environmental activist Vicuna Pacos hoped to arrange a meeting between President Fillmore and Secretary of State Red Herring on the possibility of a peace treaty between land and sea animals. Suddenly the broadcast is interrupted by the Salamandroid who announce his viewers that he and his amphibian terror squads will continue their terrorist attacks and threaten the destruction of Gnu York. Rodney then see this as a big break for the Crew to win back the respect of the nation as they head out to fly to Gnu York - but by taking a lengthy wait at the airport as their Zoo Cruiser is revoked by the government.

After finally arriving in Gnu York - in which some of the Crew complain that they could have arrive in the city in their own way i.e. Fastback's superspeed - the Crew split up to cover potential targets within the metropolis: Yankee Poodle at the business district, Rubberduck at Broodway, American Eagle at the Statue of Ribbity, Rodney at the Chimpire State Building, and Pig-Iron and Fastback at Corny Island.

Pig-Iron and Fastback walk on Corny Island's beach as the latter discuss his troubles with Pig-Iron over Alley's murder of Little Cheese and for framing Captain Carrot as the murderer. Suddenly, the beach goers frantically runs pass them from the appearance of the Crew's more gigantic enemy, Frogzilla. Pig-Iron has a terrified Fastback to get the Crew here to stop Frogzilla. The frog monster grabs Pig-Iron with his tongue and swallows him whole.

Retrieved from "https://heykidscomics.fandom.com/wiki/Captain_Carrot_and_the_Final_Ark_Vol_1_1?oldid=1433326"
Community content is available under CC-BY-SA unless otherwise noted.