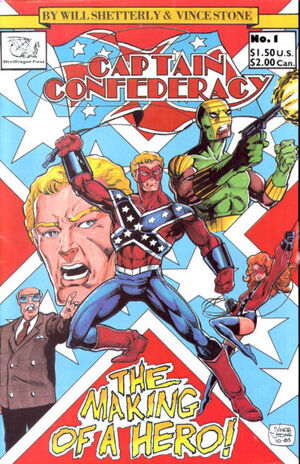 Appearing in "The Making of A Hero"Edit

Synopsis for "The Making of A Hero"Edit

Captain Confederacy and his friend Blacksnake were watching a propaganda film in which the former was playing the hero while latter was playing the villain. Next, in the film, Susan Sawyer from CTV news attempted to gain an interview from Captain Confederacy and Miss Dixie, who quickly left. Jeremy Gray insisted to his supervisor McCauley that they told the people the truth about his character. McCauley told Jeremy and his colleagues that they would be filming "the true story" the next day, which would show how Captain Confederacy and Miss Dixie had received the ultimate-potential serum. Then, McCauley told Aaron that they were considering creating a "role model" for African-American people. Later on, Jeremy's friend Kate told him and Aaron of her intention to leave Project Hero. While they drove on the road, they were harassed by three rednecks, but quickly brushed them off. In bed, Jeremy and Roxie contemplated Captain Confederacy. Kate knocked on Aaron's apartment door, bleeding out, after she was shot by C.B.I. agents after collaborating with subversives. Aaron, as Blacksnake, took Susan Sawyer hostage in the CTV newsroom and demanded to tell the public the truth about Captain Confederacy. McCauley agreed to let Blacksnake go on the air. Captain Confederacy and Blacksnake both tried to reason with each other and fought, ending with Miss Dixie shooting the latter of the men.

Ant Boy was talking to his ant friends when a woman named Ms. Axel accidentally caught him in her net. She gave Ant Boy his own net, who then used it to catch bugs and eat them, scaring away Ms. Axel and Mia. One of the ants asked Ant Boy how humans ever got to the top of the food chain.