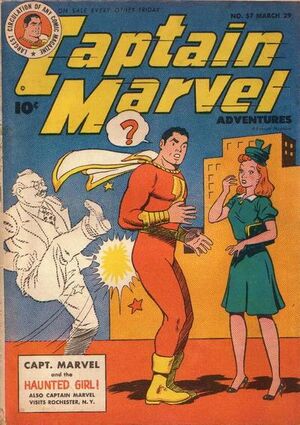 Appearing in "The Haunted Girl"Edit

Synopsis for "The Haunted Girl"Edit

Synopsis for "The Prophetic Book"Edit

A professor discovers a book which predicts the exploits of Captain Marvel. A publisher steals the book from the prof. in order to sell the chapters to the local paper. Captain Marvel puts a stop from any more installments to be released and the publisher is arrested for larceny.

Retrieved from "https://heykidscomics.fandom.com/wiki/Captain_Marvel_Adventures_Vol_1_57?oldid=1417296"
Community content is available under CC-BY-SA unless otherwise noted.