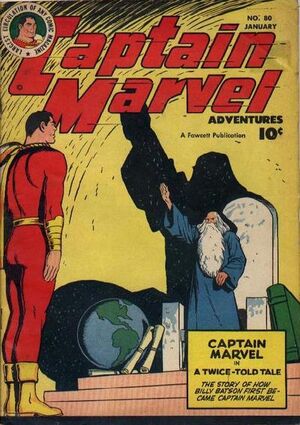 OMIGOSH! Now I remember everything! I went to the past in order to prevent Captain Marvel from ever existing! But when I got to the past, all I did was re-live the same events as before! Curses!

Appearing in "A Twice-Told Tale"Edit

Synopsis for "A Twice-Told Tale"Edit

Doctor Sivana creates time traveling pills so that he can visit the past and kill Billy Batson before he became Captain Marvel. Once in the past, Sivana's memory becomes a bit muddled and he wonders what is he doing in an empty lot. He walks down the street and buys a newspaper from the newsboy, Billy Batson. After reading the headlines, he remembers that he is the "mad scientist" mentioned in the main article. Since he is back in the past, he takes up the thread of his life, exactly as he lived it the first time. He heads to his apartment to plan his next caper. Meanwhile, Billy is approached by a mysterious figure who leads him to an underground cavern where he meets Shazam for the first time. The origin of Captain Marvel happens again and after his transformation, Billy/Captain Marvel, learns of Doctor Sivana's hideout and goes after him. During their (first) confrontation, Sivana remembers he has time traveling pills and swallows them in order to escape his "new" enemy. He pops back into present time, where (the present) Captain Marvel is waiting to apprehend his "old" nemesis.

Retrieved from "https://heykidscomics.fandom.com/wiki/Captain_Marvel_Adventures_Vol_1_80?oldid=1381278"
Community content is available under CC-BY-SA unless otherwise noted.