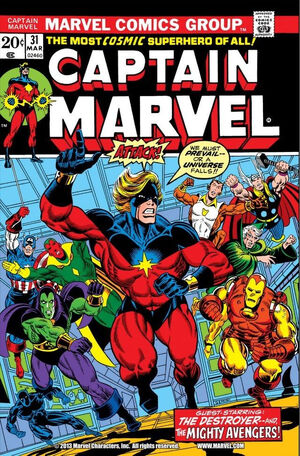 You've gone too far, Mar-Vell! Bringing in the Avengers could slow my plans!

Appearing in "The Beginning of the End!"Edit

Synopsis for "The Beginning of the End!"Edit

In response to the threat of Thanos, Captain Marvel has returned to Avengers Mansion. He asks the entire team to assemble. He has also summoned Moondragon to assist. Drax the Destroyer has also come to the mansion to find Captain Marvel. After Drax briefly skirmishes with a contingent of Avengers, the team meets to review Thanos' plans and recent events.

Thanos, who now wields the Cosmic Cube, speaks to his consort Death of his love for her and that she is the reason for his mad quest. He also decides to transport 4 individuals from Avengers Mansion: The four individuals who have interfered with him the most (or pose a unique threat)are Mar-Vell, Moondragon, Drax the Destroyer, and Iron Man. He does transport them his space craft and quickly defeats them and puts them into a statis field.

Captain Marvel is able to touch his Nega-Bands causing he and Rick Jones to switch atoms. The reaction also frees him. Iron Man, Moondragon, and Drax are also freed; and they attack Thanos again. Thanos is temporarily seperated from the Cosmic Cube. However, he is again able to defeat his adversaries. He also defeats Moondragon in a psychic battle. Thanos then retrieves the Cosmic Cube and transforms himself into a Cosmic Deity. At the end of the issue, he is seen as a large, transparent, figure on the space monitor. Thanos has achieved godhood! To Be Continued...

Retrieved from "https://heykidscomics.fandom.com/wiki/Captain_Marvel_Vol_1_31?oldid=1417040"
Community content is available under CC-BY-SA unless otherwise noted.