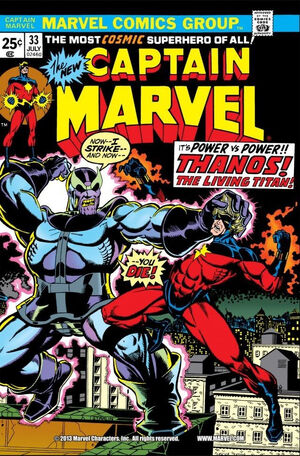 Hear me, Thanos! Titan or God, I shall yet obliterate you!

Appearing in "The God Himself!"Edit

Synopsis for "The God Himself!"Edit

Story continues following the events of Avengers #125, Captain Marvel is defeated in battle against the Cosmic Cube empowered Thanos. Following his defeat, Mar-Vell is saved by Isaac who reminds Mar-Vell what is at stake if Thanos is left to his own devices.

Meanwhile, Thanos has made the entire population of Earth disappear and has assumed a god-like form. Mar-Vell with the help of Drax the destroyer and Mantis of the Avengers work together to battle the cube-empowered Thanos. In a struggle over the cube, Mar-Vell risks his life to destroy it, reversing all of the chaos wrought by Thanos, and making the demi-god's life forfeit to Death itself.

Retrieved from "https://heykidscomics.fandom.com/wiki/Captain_Marvel_Vol_1_33?oldid=1417042"
Community content is available under CC-BY-SA unless otherwise noted.