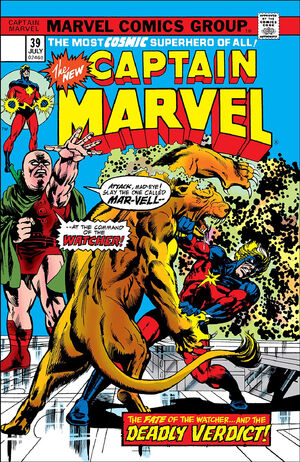 This is another fine mess you've gotten us into Marv!

Appearing in "The Trial of the Watcher"Edit

Synopsis for "The Trial of the Watcher"Edit

Captain Marvel follows the Watchers' teleportation beam back to their homeworld. Mar-Vell insists on speaking in Uatu's defense at his trial, but the other Watchers refuse to acknowledge him and imprison him in a stasis field so he can't follow, then leave him in the jungle clearing where they arrived. Mar-Vell and Rick plan to switch in hopes of disrupting the field, but Mar-Vell can't even move his arms enough to clash the Nega-Bands. Instead, they put their minds together in an extension of their newfound ability to switch through will alone and ultimately free themselves from each other as well as the field.

Their feat is witnessed from the shadows by a young Watcher named Aron as well as a jungle predator called a Rackcat. The Rackcat attacks as soon as Mar-Vell and Rick separate, forcing Mar-Vell to fend it off before they can search for the trial. The Rackcat pursues them persistently and Aron continues to observe out of fascination.

Mar-Vell and Rick find the Watchers' Temple of Justice just as the trial begins. Emnu concedes to let them stay for the trial as long as they observe the Watchers' code and explains how his race's original indulgence in interfering with other worlds even with good intentions had brought about catastrophe for those they sought to help. He then reads off the numerous charges of interference Uatu had been guilty of in Earth's recent history, ending with his direct assault against Captain Marvel. Mar-Vell attempts to persuade the Watchers to reconsider their code considering all of Uatu's interference had been helpful and that he doesn't hold their earlier conflict against him.

When the Rackcat and Aron catch up, the Rackcat continues its assault on Mar-Vell while the Watchers stand by in non-interference. Aron offers to help, saying he believes that Mar-Vell doesn't deserve to die, but Emnu refuses to allow it. With no other option, Rick risks his own life to help Mar-Vell incapacitate the Rackcat. Afterwards, Mar-Vell makes one more plea to the Watchers to consider that saving his life was worth the act of interfering. Uatu confesses that he only wanted to help and that attacking Captain Marvel was out of envy for his role as Protector of the Universe. He promises never to interfere again and Emnu accepts the promise, ending the trial. Rick Jones is left flabbergasted that Uatu could get off so easily.

Retrieved from "https://heykidscomics.fandom.com/wiki/Captain_Marvel_Vol_1_39?oldid=1515385"
Community content is available under CC-BY-SA unless otherwise noted.