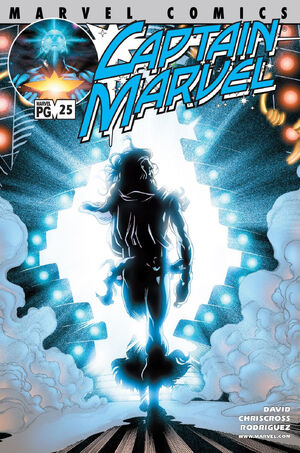 I've been giving much thought to you, Una-Rogg. We were going to evolve you, make you one of the Ruul, but I've rethought it. Instead...you will be given a small vessel, to roam the galaxy, exiled, the last of your kind, part of a Kree race that is hated and despised...and knowing that that race has left you behind. You will live knowing, Una-Rogg, that from an evolutionary standpoint...you are the weakest link. Good-bye.

Retrieved from "https://heykidscomics.fandom.com/wiki/Captain_Marvel_Vol_4_25?oldid=1417106"
Community content is available under CC-BY-SA unless otherwise noted.