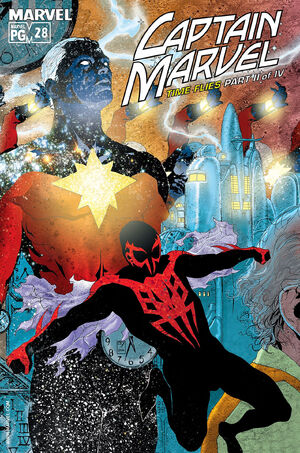 Bottom line: Someone named 'Thanatos' effectively killed me using a weapon he called the Spear of Destiny. And unless I deliver you up to him, Genis, at a place called 'Virtual Unreality' at someplace called Alchemax...then you're looking at one very uneternal Eternal.

Appearing in "So Tonight We're Gonna Party Like It's 2099"Edit

Synopsis for "So Tonight We're Gonna Party Like It's 2099"Edit

Retrieved from "https://heykidscomics.fandom.com/wiki/Captain_Marvel_Vol_4_28?oldid=1417109"
Community content is available under CC-BY-SA unless otherwise noted.