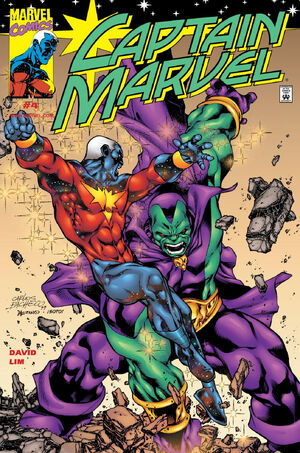 Hello. I am Drax the Destroyer. My daughter desires a box of mint cookies, please.

Appearing in "Other Side of the Drax"Edit

Synopsis for "Other Side of the Drax"Edit

After the events of issue # 3 with the Hulk and Wendigo, Marlo and Captain Marvel head back to California. Meanwhile Rick goes to see Moondragon who wants to train Genis-Vell on how to properly use his powers. Unfortunately, this leads to a confronation between Captain Marvel and Drax the Destroyer with both ending up in the Negative Zone.

Retrieved from "https://heykidscomics.fandom.com/wiki/Captain_Marvel_Vol_4_4?oldid=1417085"
Community content is available under CC-BY-SA unless otherwise noted.