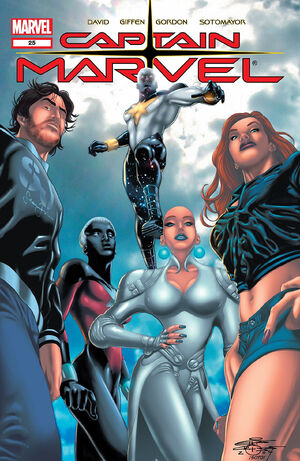 Captain Marvel and his friends are going about their average day. They talk about the challenges they face and the curious situations they find themselves in. However, as they mention them, the scenarios keep suddenly and inexplicably resolving themselves.

Vowing to investigate, the group meet Eulogy, a brother of Entropy, who introduces himself as the cosmic being responsible for graceful endings. He explains that, due to forces beyond his control, their adventures are set to come to an end.

The five of them argue that nothing will stop them from having adventures, but Eulogy begs them not to: all stories ultimately end in tragedy. With wit, tragedy can be deferred, but ultimately, tragedy comes for us all.

Rick Jones asks the others to listen to him, saying that his many years of adventuring have given him "comics awareness", and he says they should listen to Eulogy.

Everyone agrees to leave the secret headquarters, except Genis-Vell, who asks them to stay. Feeling charitable, Eulogy hands him a phone, and says that if he waits, it will ultimately ring. Then he summons a door to take them wherever they want to go, and one by one, the heroes go through the door.

On his own, Genis shouts to the walls that he can wait, that he can make it on his own. However, in the end, he puts the phone down and flies through the door.

There is silence in the headquarters.

Then the phone rings.

Retrieved from "https://heykidscomics.fandom.com/wiki/Captain_Marvel_Vol_5_25?oldid=1417141"
Community content is available under CC-BY-SA unless otherwise noted.