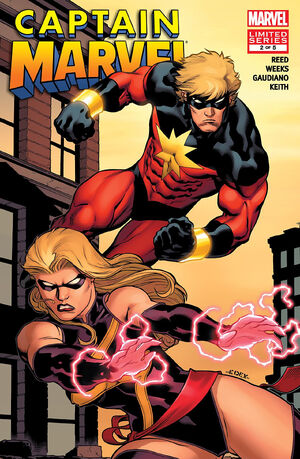 Some things never change, do they? I always enjoyed the sound of a happy crowd calling my name.

Captain Marvel is back, and everyone on Earth wants a piece of him. Ms. Marvel wants him in the Avengers. Iron Man wants him to hide away in safety. And the Church of Hala wants him as their messiah. Brian Reed (NEW AVENGERS: ILLUMINATI) and Lee Weeks (DAREDEVIL) continue the year's most stunning mini-series!

Retrieved from "https://heykidscomics.fandom.com/wiki/Captain_Marvel_Vol_6_2?oldid=1417143"
Community content is available under CC-BY-SA unless otherwise noted.