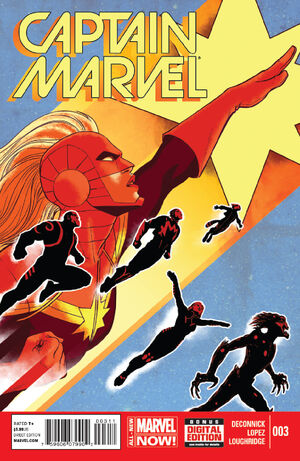 • Captain Marvel & The Guardians of the Galaxy!

• Carol takes her mysterious alien passenger home... and lands in the middle of an uprising against the Galactic Alliance!

• Does our good soldier obey orders — or defy the Avengers and side with David against Goliath? Two guesses. First one doesn’t count.

Retrieved from "https://heykidscomics.fandom.com/wiki/Captain_Marvel_Vol_8_3?oldid=1649922"
Community content is available under CC-BY-SA unless otherwise noted.