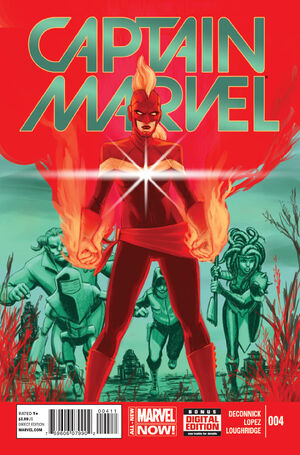 • Captain Marvel has a hunch about the REAL reason behind the forced resettlement of the Rocket Girl’s people and sets out with a new crew to find proof!

• Turns out Carol’s got a history with the man behind the plot. Rut roh.

• What time is it? When the bad guy tries to blackmail our hero and use the Avengers against her… Could it be PAYBACK TIME?

Retrieved from "https://heykidscomics.fandom.com/wiki/Captain_Marvel_Vol_8_4?oldid=1562143"
Community content is available under CC-BY-SA unless otherwise noted.