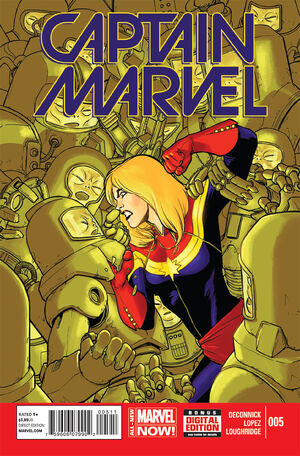 My name is Captain Marvel... I am an Earthling and an Avenger. But today I stand as one with the settlers of Torfa, who clam this planet and its resources as they were freely given in the aftermath of the Behemoth disaster... They are a peaceful people, but I am a woman of war. I you move against them, you move against me. I am willing to die here today, for this cause. I have made my choice... Now you make yours.

• Ever since she set off on her latest “adventure,” Carol Danvers has had her butt handed to her at every turn.

• She’s done with that nonsense. Let’s start flipping some tables, shall we?

• Tic, the Rocket Girl, and Jackie, the Warlord, are getting in on the “Oh no you di’n’t!” action too!

Retrieved from "https://heykidscomics.fandom.com/wiki/Captain_Marvel_Vol_8_5?oldid=1417168"
Community content is available under CC-BY-SA unless otherwise noted.