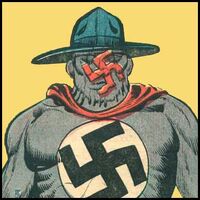 Captain Swastika allied himself with the Nazi Party and fought for his Fascist beliefs on American soil. Though he was often caught and imprisoned, he always broke out of jail and was hunted down by his sworn enemy, Hangman.

He met his end in Mexico when he tried to sabotage the oil refineries there. During the uproar, his own henchman, named Ice-Pick, killed him by accident. A Mexican solider shot Ice-Pick, thus ending their brutal reign of terror.