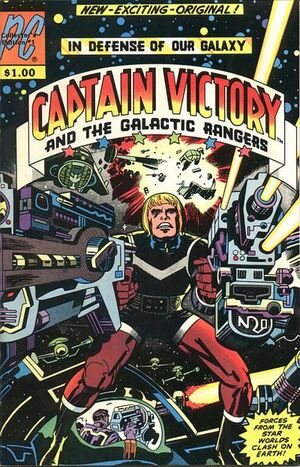 Appearing in "Captain Victory and His Galactic Rangers"Edit

Synopsis for "Captain Victory and His Galactic Rangers"Edit

A Borg-like society of beings called Insectons led by the Lightning Lady ravage planets until exterminated by Captain Victory and his rangers. After their latest hive is destroyed, Lightning Lady leads her people to Earth. Mister Mind tracks her disappearance from battle and informs Captain Victory's clone, since he was killed during the Insecton attack on the bridge. The clone possesses all of his predecessor's memories, so it is just as though the Captain has exchanged bodies. Captain Victory gives the order to jump the light years to Earth in pursuit.

Retrieved from "https://heykidscomics.fandom.com/wiki/Captain_Victory_Vol_1_1?oldid=1738764"
Community content is available under CC-BY-SA unless otherwise noted.