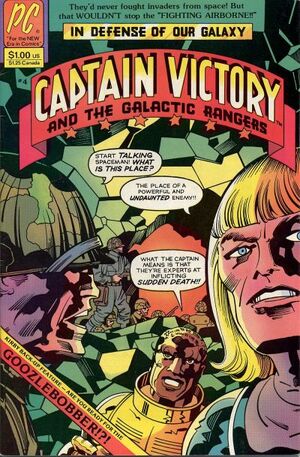 Appearing in "The Fighting Airborne!"Edit

Synopsis for "The Fighting Airborne!"Edit

More Insectons had arrived and they had a new Hivemind. The Insectons began to overwhelm, Captain Victory and his allies, so Klaxus underwent the cyclotronic conversion, turning himself into a metallic, in order to enhance himself against the Insectons. Many of the Rangers and Fighting Airborne perished during the battle.

Meanwhile, the military set up a blockade outside of Spartanville. Additionally, the military also met up with members of the Galactic Rangers, discussing the situation. Then, Captain Victory and Klavus were beamed up onto the Tiger to talk to Lightning Lady, whom they were holding prisoner onboard. Captain Victory attempted to get Lightning Lady to surrender. However, Lightning Lady unsuccessfully attempted to seduce Captain Victory. Then, she shot electricity at him, getting into a fight. Suddenly, she vanished and Mister Mind entered the cell. Moments later, Captain Victory officially made Mister Mind a Galactic Ranger and sent him to Section 51 of the ship. Captain Victory went to the engineering section where he looked at a giant robot. Back on the ground, Tarin and the other rangers continued to fight against the Insectons.

Meanwhile, at Section 51, Mister Mind was counting the fauna onboard the Tiger. In a suburb near Scranton, civilians were encountering the fauna from the Tiger.

Retrieved from "https://heykidscomics.fandom.com/wiki/Captain_Victory_Vol_1_4?oldid=1738765"
Community content is available under CC-BY-SA unless otherwise noted.