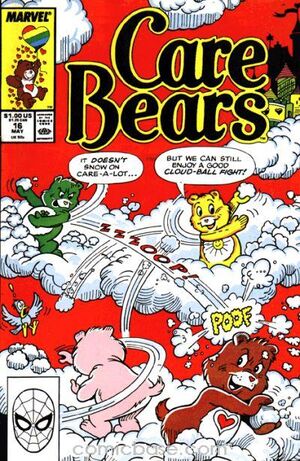 Appearing in "The Uncouth Tooth Fairy"Edit

Synopsis for "The Uncouth Tooth Fairy"Edit

When a rogue tooth fairy starts ruining children's teeth with his Terrible Taffy, Grams Bear and her friend Gracie must discover what, or who, led to his corruption.

Good Luck Bear becomes unlucky after finding a five-leaf clover, and decides to leave Care-a-lot to spare others from his misfortune. While in exile, he meets a similarly unlucky boy named Steve, and the two compete to see who is the unluckiest of all.

Retrieved from "https://heykidscomics.fandom.com/wiki/Care_Bears_Vol_1_16?oldid=1417232"
Community content is available under CC-BY-SA unless otherwise noted.