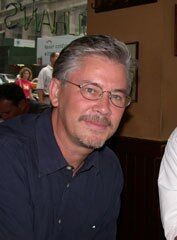 Raised in Oakland, San Leandro, and San Diego, California, as well as in Hawaii, Potts received an Associate's degree in commercial art from Chabot College in Hayward, California.[2]

After contributing to such comics fanzines as the anthology Venture,[3] Potts drew backgrounds and some secondary figures for a late fill-in issue of DC Comics' Richard Dragon: Kung Fu Fighter, being drawn by Bay Area comics artists Jim Starlin and Alan Weiss.[2] Potts began his comics career in 1975.[4]

Relocating to New York City, he freelanced briefly until joining Neal Adams' commercial-art company and comic-book packager Continuity Studios. As he explained in a 2000 interview: "Continuity was gearing up to produce black-and-white magazines based on several TV series: The Six Million Dollar Man, Space: 1999 and Emergency!. I got involved with storyboard and comp art for major New York ad agencies. I also produced finished-illustration for magazines and books for several years before joining Marvel's editorial staff in 1983".[2]

At Marvel as an editor, Potts worked with such notable comics creators as Jon Bogdanove, Mike Okamoto (who won the Russ Manning Award as artist on Epic's Atomic Age), Whilce Portacio, Steve Skroce, Larry Stroman, and Scott Williams early in their careers. He oversaw the development of The Punisher from guest star to franchise character, and edited such titles as The Incredible Hulk, Doctor Strange, The Defenders, The Thing,[5] and Alpha Flight, as well as the newly created Power Pack and Strikeforce: Morituri. Potts' editorship was humorously characterized in 1988 as "a remarkable feat considering [his] legendary spelling disability."[4] Potts was the editor through whom both Art Adams and Jim Lee broke into the comics industry with their first Marvel Comics work.[6][7][8]

After hours, Potts continued to write and produce occasional art for Marvel, and in 1983 teamed with Alan Zelenetz and Frank Cirocco to co-create the series Alien Legion, conceived as "the French Foreign Legion in space." Two ongoing series and several miniseries and one-shots were produced.[2][9] In the mid- to late 2000s, Alien Legion was optioned by producer Jerry Bruckheimer and The Walt Disney Company.[10]

In 1989, Potts was named executive editor in charge of the Epic imprint, and about a third of the mainstream Marvel titles. Five years later, he became editor-in-chief of the "General Entertainment" and Epic Comics divisions.[2]

After 13 years at Marvel, Potts left to become Creative Director at VR-1, a massively multiplayer online game company.[2] He then worked with Gary Winnick and Cirocco's Lightsource Studios.[2]

Retrieved from "https://heykidscomics.fandom.com/wiki/Carl_Potts?oldid=1562692"
Community content is available under CC-BY-SA unless otherwise noted.