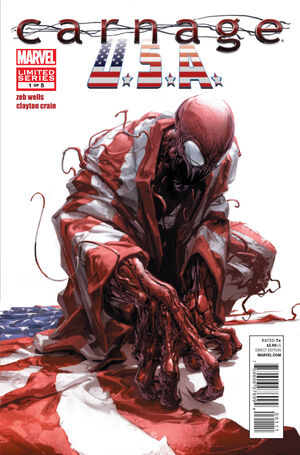 Appearing in "This Land Is MY Land"Edit

WELCOME TO CARNAGE U.S.A. – THE ULTIMATE RED STATE! Carnage’s maniacal reign of terror continues, courtesy of the critically acclaimed creative team of Zeb Wells and Clayton Crain! Spider-Man and the Avengers must go on a brutal hunt to capture Cletus Kasaday before a small town in the American heartland falls under his mass-murdering spell! Buckle in and prepare for a violence packed adventure! Carnage U.S.A. wants YOU this December!

Retrieved from "https://heykidscomics.fandom.com/wiki/Carnage,_U.S.A._Vol_1_1?oldid=1652982"
Community content is available under CC-BY-SA unless otherwise noted.