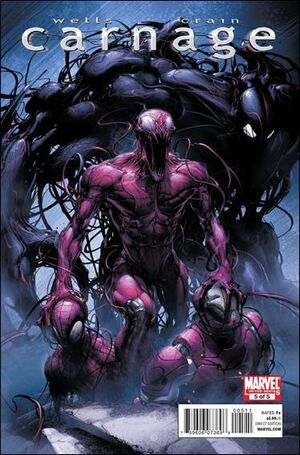 While Michael Hall is being flown to safety, Shriek and Doppelganger reunite with Carnage. Carnage continues to fight Spider-Man and Iron Man.

Meanwhile, Tanis Nieves awakens to a riot of people being controlled by Shriek. She feels ashamed that she wouldn't let them put her on medication after seeing what it has caused.

Iron Man attempts to take control of the suits Carnage has merged with by inject a virus into them but his suit ends up getting data from Carnage, forcing him to abort.

Shriek holds Tanis with her new symbiote and shows her what she's done to the rioters. Her screaming frightens the symbiote and it leaves her. Tanis gives in and allows the symbiote to bond with her, turning her into Scorn. Gripping Shriek by the neck, Scorn forces her to shriek, which knocks Carnage to the ground. Iron Man and Spider-Man use this opportunity to break open the suit, but when they do, they find that Carnage had escaped.

Tanis drags Shriek, who is unconcious, by the hair and tells them about the dog she had as a child. Her parents wanted to put it down but she wouldn't let them and it ended up biting her brother in the face. She realizes that some things have to be put down, including Shriek.

In the aftermath, Spider-Man and Iron Man searched for Carnage but the trail had run cold. Shriek is in a coma and it is unknown if she will wake up. Tanis is put into Iron Man's care in hopes that Scorn can help them find Carnage. At an unknown location, Cletus hides out with Doppelganger and holds Michael Hall prisoner while he plans his comeback.

Cletus Kasady is back in the Carnage symbiote and deadlier than ever! Spider-Man and Iron Man’s most brutal battle comes to its fatal conclusion! Carnage has been abused, exploited and tortured by his captors...and he’s out for revenge! Bodies will pile up and gore will fly if Spidey and Iron Man can’t stop Cletus...and they can’t stop him without the help of another mysterious symbiote...

Retrieved from "https://heykidscomics.fandom.com/wiki/Carnage_Vol_1_5?oldid=1651289"
Community content is available under CC-BY-SA unless otherwise noted.