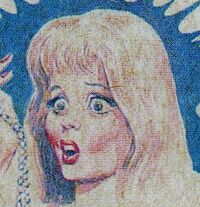 Carrie was a clumsy, accident-prone but basically good-hearted girl who had an unfortunate tendency to get herself into embarrassing situations, in which she would customarily end up accidentally stripped naked. Her cousin Connie had a similar affliction.