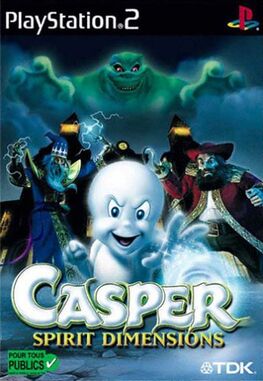 Casper: Spirit Dimensions is a 2001 action-adventure video game released by Lucky Chicken. The game is based on Casper the Friendly Ghost.

The words appear in the beginning of the game, "A great evil appeared, striking fear into all ghosts and spirits. He attacked without warning. No ghost could withstand his power. His strength grows, he is not content to rule over the spirits alone...only when he controls the living and the dead will he be satisfied. There are a few left fighting against him. A young witch, Wendy, has come to the only friend she knows for help. He is the last free ghost... the last chance the spirit world has for salvation, a lone defender guarding the mortal world from the great evil. The fate of the world lies in the hands of one small ghost...Casper."

Casper meets Wendy the Good Little Witch in his house. Wendy will open a door that will lead Casper into the first dimension after Wendy tells Casper what to do. The first dimension is the Knight's Home. Casper will meet Sir Richard, who will need help with finding five parts of his armor and defeating eight archers. Casper will then to meet three other people in the other levels, Jeremy, a guy who will need help with collecting ten stacks of gold and breaking a stone that has a sword inside, Princess Gwendolyn who was turned into a frog and needs help getting turned back to human by touching a red heart gem, and a king who needs help getting out of the chains by collecting five keys. Casper will have to defeat four dragons after collecting four parts of a key from the people that he helped with. The dragons weak spot is in the head. The first dragon is red, who is weak to ice, a blue dragon who is weak to Casper's powerful spirit blast (if the player holds the R2 button long enough), a white dragon who is weak to fire, and a green dragon who is weak to Casper's spirit blast.

After the first dimension is saved, Casper goes to the second dimension, Vlad's Amusement Park. Casper finds Marty, who is in an elephant costume and he will need help by taking out a flying balloon, by using a cannon, but it needs it's six parts. After doing that William will give Casper a half of a ticket. Casper will meet Vlad and must complete three challenges in order to get the other half. Casper will then meet a strong guy, who will tell Casper how to defeat Krank, a jack-in-the-box who took over the second dimension. Krank must be defeated by four cannons by lifting them up and lighting them.

After the second dimension is saved, Casper goes to the third dimension, a lab. Casper will meet Professor Neutron who had built a machine that will make monsters for Kibosh, just because Kibosh told him to. The professor needs help to stop it by going around in circles to activate a genreator, go in tubes in the correct order, defeat robot wasp's, and pull a big switch. The professor will give him half of a key-card. Casper will meet a robot named Charlie, who will need help with his big brother robot, George who has been turn off by Kibosh. In order to turn him back on, he needs five keys. One for his head, two for his arms, and two for his legs. In order to get the keys, Casper will have to take down laser currents of the same color as the keys are. After that, George will give him the other half of the key-card. Casper will have to defeat Professor Neutron's arch enemy, Doctor Deranged. In order to defeat him, you need ram his robot and shoot it's red light.

After the third dimension is saved, Wendy was going to open the fourth dimension, the spirit world, but was captured by Kibosh. Vanessa, who is also a witch, opens the door for him. Casper will have to collect eight TNT and light them to get into the ghost ship. After fighting skeletons, passing through a deathtrap, blew another TNT, Casper will need to defeat Captain Pegleg Potbelly who works for Kibosh. In order to defeat him, Casper needs to dodge his gun fire and charge at the barrels that he throws.

After that he frees her, he will face Kibosh. Casper needs to shoot his fire spirit blast at him when he is in the center. Kibosh will crash into the center and it will blow up the castle, but that won't stop him, he'll grow ten times and will become powerful. Casper must run or he'll get hurt a lot. He must shoot his fire blasts at him until blue spirits fly out. Casper becomes Blue if he grabs them and he will shoot Kibosh in the face until the blue runs out. He goes to the Dark and the player wins the game.

In the Dark, Kibosh swears that he will revenge on Casper and ends with his evil laugh.

The game received mixed reviews from critics. This can probably be blamed on its controls for moving. Both right and left analog stick are needed to move Casper. This made it harder for children to play.[citation needed]

Retrieved from "https://heykidscomics.fandom.com/wiki/Casper:_Spirit_Dimensions?oldid=183542"
Community content is available under CC-BY-SA unless otherwise noted.