Start a Wiki
Part of the 'Cataclysm' event 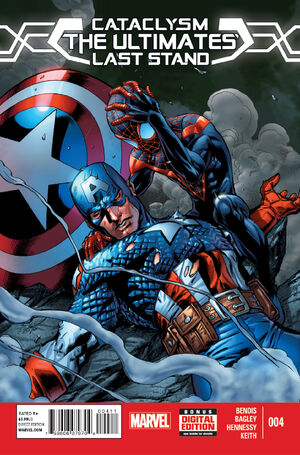 As fire and destruction coming from Galactus engulf Manhattan, the X-Men look on in horror. Jimmy Hudson and Jean Grey decide that the situation is hopeless and that they need to leave, but Kitty Pryde refuses to not do anything. The Ultimates then arrive and ask the team for help. The X-Men refuse because of all the Ultimates have done to them, with Jimmy Hudson getting right in their faces, but Captain America says that they only really need Kitty Pryde for what they are planning.

The X-Men are taken aboard the Triskelion, where Stark and a fully-converted Reed Richards are working on the various parts of the plan Richards and Spider-Man created. Richards and Sue Storm prepare to take blood and urine samples from Kitty when Kitty recognizes Richards as the man who, as the Maker, tried to destroy the world. Richards says that that was an old nightmare, and that the nightmare of right now is "the big, giant purple guy" (as Jimmy puts it). Stark then recognizes Jean Grey and suddenly creates a new part for the plan - involving a Cerebro. Stark also says why they need Kitty: she needs to phase through Galactus, destroy his Gah Lak Tus armor from the inside, and then kill him from there. Taking the samples, Kitty is overwhelmed with the fact that she needs to phase through a being the size of Newark, but S.H.I.E.L.D. has a plan to improvise. Monica Chang gets the Cerebro ready, which Jean is to use in order to find some of Galactus' secrets. Kitty asks what exactly is going to happen, and Stark says that they are going to use some Pym Particles in order to make her large enough to phase through Galactus, whereupon she can destroy him - something that may very well kill her. Kitty accepts and hugs Storm goodbye as Jean Grey gets into Galactus. Galacus appears to be confused on where he is despite knowing he is not in Earth-616. Stark tells her to go find out if he has a weakness, but this results in Galactus discovering the Triskelion.

Galactus attacks the Triskelion, and Thor and some Quinjets go out to stall him while Kitty receives the Pym Particles. Galactus grabs Thor and throws him straight through the Chrysler Building before saying the above quote. Desperately, Cap takes a Quinjet in order to help just when Stark and Richards needed help. Storm creates a tornado, but the Triskelion gets caught in it, tearing it apart and forcing Spider-Man to save some agents from falling out. Cap, meanwhile, aims his ship directly at Galactus' mouth. After shooting his teeth, Captain America attempts to bail out, but the ship crashes into the upper roof of Galactus' mouth, killing the once-Living Legend. The Triskelion eventually is too damaged to continue on, and everyone is forced to evacuate. As a beaten Miles Morales is the last to board, the survivors evacuate. As they leave, Galactus grabs the Triskelion and again says the above quote.

Retrieved from "https://heykidscomics.fandom.com/wiki/Cataclysm:_The_Ultimates%27_Last_Stand_Vol_1_4?oldid=1418478"
Community content is available under CC-BY-SA unless otherwise noted.