View source
Not to be confused with Catwoman (Video Game).

The Game is a Catwoman storyline published as part of The New 52. Following the timeline reboot in Flashpoint, it establishes her position in Prime Earth continuity. It's the debut arc of Judd Winick and Guillem March on thei 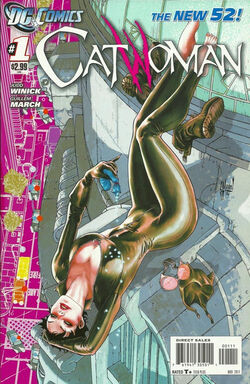 The Game is a Catwoman storyline published as part of The New 52. Following the timeline reboot in Flashpoint, it establishes her position in Prime Earth continuity. It's the debut arc of Judd Winick and Guillem March on their Catwoman volume. This is followed by Winick's second arc Dollhouse.

Catwoman's apartment explodes. On the run, she meets with her close friend and fence Lola MacIntire who finds her a job and a place to stay. She works undercover as a bartender at a Russian mob party with prostitutes, but freaks out when she sees her former pimp Renald Ivanko. Beating him half to death in the bathroom, she escapes the party with guns blazing after her. Returning to her hotel room, she finds a concerned Batman and despite his protests they have sex; they leave most of the costumes on.[1] Ripping off mobsters the next day, she starts another gunfight at a Wayne Trust charity gala. Returning home, she finds Lola murdered by the man who blew up her apartment; he identifies himself as a criminal named Bone.[2] Breaking out of her chair before they can execute her, she cripples two of the henchmen and then nearly beats Bone to death with a baseball bat. Batman arrives to stop her from committing murder, but while kissing him she pushes Bone off the building's ledge; Batman dives to save the criminal while Catwoman escapes. The police then find her in Lola's apartment burning any evidence that could connect the two of them.[3] Barely escaping, she attends Lola's funeral where she meets and catches up with her old partner Gwendolyn Altamont. On the GCPD, an ambitious Detective named Alvarez begins a case against her as he believes that seventeen home invasions were committed by the same perpetrator. Robbing some small-time drug dealers, she is attacked by a super-villain who calls herself Reach.[4] Reach sends Catwoman flying half a mile into the air, but she finds a way to brace herself coming down and survives. Punching Reach out, she tries to celebrate but gets busted after discovering the stolen money actually belonged to corrupt police officers.[5] They claim that she escaped custody so they can have Reach brutalize her in the back of Police Headquarters, but Detective Alvarez intervenes and lets her go. Outside, Batman tries to reclaim the stolen money and reveals that she went unrecognized because he had her prints wiped from the police system. They fight and he insists that her life of crime is only bringing her trouble, eventually asking if she wants to die. Selina replies that maybe she does, with tears in her eyes, and then flees the scene without the money. Returning to Gwen's apartment, she breaks down and asks for her help as a friend.[6]