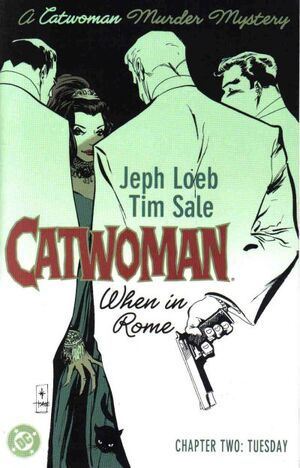 Catwoman (Selina Kyle) escapes from Don Verinni's estate pursued by dogs, upset that her best lead has been killed and worried that the Joker's involved and Batman will turn up. She returns to the hotle, to find her bags have turned up and Eddie Nigma (the Riddler) is playing dress-up in her costume. Selina throws him out, and goes to bed.

Dreaming, Selina sees Batman standing over her, about to shoot her. She jumps up, knocks him back, and wakes to find she's assaulted an unarmed Christopher "The Blonde" Castillo. She lets him up, and he asks her about Catwoman. Before she can answer, Eddie bursts in to tell them that the hotel's on fire. They jump out of the window into the pool.

Blondie takes them to a boat of his, saying that he believes it is Verinni's son, Guillermo Verinni, trying to kill them in revenge. While there, Eddie says that he's had no luck finding out about the Joker's movements. Selina says that it's unlikely someone else used the Joker poison, as no-one even believes in Batman. She speculates that it would be easier if they knew who the Joker was before he became the Joker. Eddie says that it's Gotham's second best riddle, and the best is "who is Batman behind the mask?" Verinni arrives with several henchmen and attack. Selina changes into her Catwoman costume, and helps Blondie fight them off. Then Verinni unveils Freeze's , and traps Catwoman in ice.

Retrieved from "https://heykidscomics.fandom.com/wiki/Catwoman:_When_in_Rome_Vol_1_2?oldid=1418101"
Community content is available under CC-BY-SA unless otherwise noted.