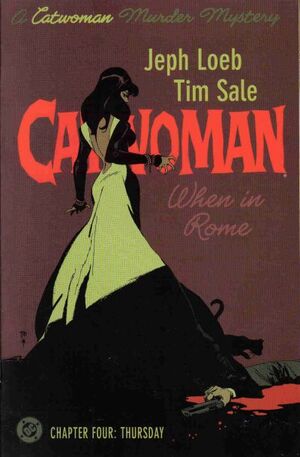 Catwoman (Selina Kyle) dreams, remembering her first encounter with Batman after stealing from Carmine "The Roman" Falcone. She remembers looking at a photograph, and Batman telling her to give back what she'd stolen. She fought back, and awakes.

She's got her hands tied, and Cheetah is crowing over her, having taken the ring from her. Catwoman asks who hired Cheetah, but gets no reply, She tears the rope with her claws, and attacks Cheetah. They fight, while Catwoman wonders why so much super-villain gear (Joker poison, Freeze's gun, Cheetah) should appear in Rome at the same time she does. Cheetah nearly gets the upper hand, but Catwoman reverses, half-strangling her with her own tail and demanding the name of her employer. At that moment, Christopher "The Blonde" Castillo shoots her. Catwoman demands to know why, and he tells her it was a tranquilizer, but he doesn't know how long she'll be out, as he doesn't usually have to worry about his victims getting up again. While they argue, Cheetah escapes. Catwoman explains that while she got the ring's box, she'd hidden the ring on her person. Blondie then points a gun at Catwoman, demanding to know why she came to Rome. She slices off his barrel, warns him not to do it again, and runs.

Back on Blondie's yacht, Selina is bandaging a wound from her fight when Batman comes in. He tells her he loves her and kisses her. Then she wakes up, and finds she's kissing The Riddler (Eddie Nigma).

Retrieved from "https://heykidscomics.fandom.com/wiki/Catwoman:_When_in_Rome_Vol_1_4?oldid=1418103"
Community content is available under CC-BY-SA unless otherwise noted.