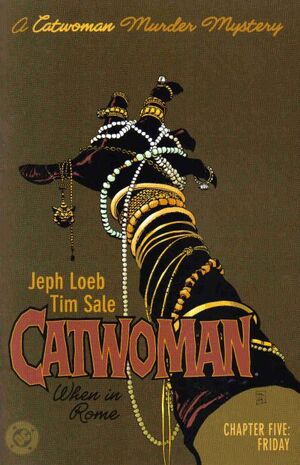 Catwoman (Selina Kyle) awakens to find herself kissing the Riddler (Eddie Nigma). She drags him out and kicks him overboard. Selina demands to know what he was doing, and Christopher "The Blonde" Castillo threatens to shoot him. Eddie reminds her that she needs him to uncover the truth, and they throw him a life-ring. Eddie explains that he walked into her room just as she grabbed him and kissed him.

Catwoman visits Guillermo Verinni, and uses the ring as bait to get him outside. Blondie holds a sniper rifle on them, and Catwoman explains that she didn't kill Verinni's father, and that she thinks he did. She knocks him and his men down, and offers to swap the ring for the location of Louisa Falcone.

Catwoman sneaks into the nunnery Louisa is in. She asks Louisa if it's possible she's her daughter. Louisa says she only had one daughter, Sofia, and Catwoman leaves. Then Blondie comes out of the shadows, and is told to assassinate her.

Back on Blondie's yacht, Catwoman packs to leave. Then Batman calls her outside and attacks her with a sword. She fights back, and is run thorugh the shoulder. Then she reveals that she knows what's happening as she sees what's really there: Riddler, Cheetah, Verinni with Mr. Freeze's gun, and Scarecrow.

Retrieved from "https://heykidscomics.fandom.com/wiki/Catwoman:_When_in_Rome_Vol_1_5?oldid=1418104"
Community content is available under CC-BY-SA unless otherwise noted.