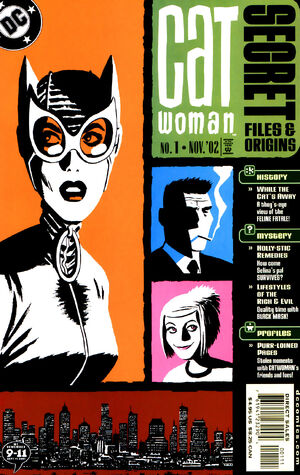 Appearing in "The Many Lives of Selina Kyle"Edit

Synopsis for "The Many Lives of Selina Kyle"Edit

Several mobsters discuss Catwoman. One thinks she's a crimefighter, one think she's Batman's lover, and one think she's a crook. Holly and Karon discuss Catwoman. Holly thinks she's a savior, among other things. The story ends with Catwoman busting-up the mobsters. She tells them to tell their boss, Junior Galante, the head of Gotham's Mafia, that the price of doing business in Gotham's East End just went up.

Appearing in "The McSweeney Case"Edit

Synopsis for "The McSweeney Case"Edit

Slam Bradley tries to discourage Martin McSweeney, son of Tommy McSweeney - a lifer that Slam helped lock-up, from a life of crime. Selina rides shotgun to keep him company.

Appearing in "Why Holly Isn't Dead"Edit

Synopsis for "Why Holly Isn't Dead"Edit

Holly takes a bath and complains about how they relaunch comic books and retcons characters while Selina Kyle changes between several different Catwoman outfits in front of her. (The irony being that Holly herself owes her very life to a change in retcon.)

Black Mask plans to get revenge on Catwoman by freeing a mysterious woman (who knows Catwoman's secret identity) from prison. He also finds time to take a break and torture someone.

Retrieved from "https://heykidscomics.fandom.com/wiki/Catwoman_Secret_Files_and_Origins_Vol_1_1?oldid=1695915"
Community content is available under CC-BY-SA unless otherwise noted.