Part of the 'Zero Hour' event 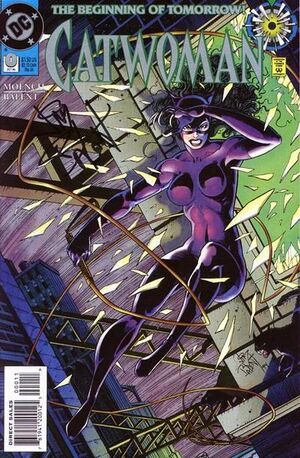 I'm warning you...don't back me into a corner!

As Catwoman slinks upon a Gotham City rooftop, she is reminded of herself as a young child practising acrobatics, while her father Brian drinks himself away due to depression following the suicide of his wife. At Selina's school, her guidance counsellor tells Brian about her inability to interact with teachers and other students as well as her only aptitude being gymnastics. This information falls upon deaf ears as Brian's depression is too much. Soon her father drinks himself to death. She calls 9-1-1 and flees the scene, but not before releasing her pet cats into the city. She roams the streets but is caught within a week.

Selina ends up in Seagate, a reform school for runaway girls. The director of the facility is a hard-case who runs the place like a fascist state. In the weeks that follow, Selina deliberately defies the director and her brutish faculty. Even at this place, Selina has no interaction with the other girls. Overhearing a security system installer tell the director the security code while she lurks in the school's shadows, Selina uses it to her advantage to escape onto the rooftop at night.

Selina's defiance gets to the director, who subjects her to the punishment of cleaning the facility. Her refusal enrages the director more, who in turn belts her and has her locked away in solitary confinement with no food. Selina can still easily escape to the rooftop and eventually the kitchen. She then tries the director's office to retrieve the key to her room when she overhears the director talking on the phone about fake inspection reports. A ledger in the director's office that Selina steals shows that for years the director has been embezzling funds. When the director checks on Selina one night, Selina calls her out on the crime. Enraged the director leaves, but returns later when Selina is asleep and chloroforms her, places her in a bag, and throws her off a cliff into the sea. Selina is able to escape and returns to the facility, ledger in hand. With the ledger as insurance, she blackmails the director to take her name off the record books in exchange for her silence. After tying up the director with her own belt, she lets out all the other girls, but still has nothing to do with any of them.

Present day, Catwoman is staking out a socialite whose will leaves her possessions to her cat, including a diamond studded necklace around its neck. Not only does Catwoman take the goods, but gives the cat a new home also.

Retrieved from "https://heykidscomics.fandom.com/wiki/Catwoman_Vol_2_0?oldid=1417876"
Community content is available under CC-BY-SA unless otherwise noted.