Start a Wiki
Part of the 'KnightsEnd' event 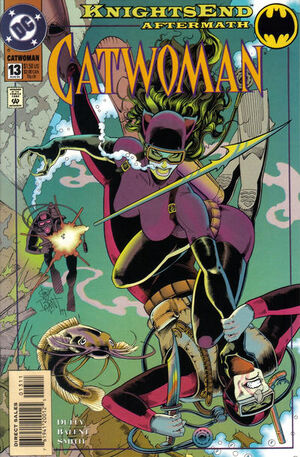 After the bout of the Batmen on top of Gotham River Bridge, Catwoman finds herself alone with an unconscious Selkirk. The cops, mistaken about the situation, try to take her into custody, but she bails out into the river.

At the hospital, Germanicus and Tamsyn wait for Selina to show up with the neural enabler for Brendan. Suddenly, in walks in Dr. Mellyora Hubbell, who invented the enabler. She informs Tasmyn that the enabler has never been tested and Germanicus assures her that it will be retrieved shortly and hopefully tested on Brendan.

When she gets to the surface she is greeted by Selkirk and Dr. Hubbell. Hubbell bailed out Selkirk and sold her enabler to him for his cybernetic technology because she would make more money this way than by selling it to research firms. Catwoman is forced to give up the enabler in exchange for the release of her friends.

Selkirk and Hubbell escape to his limo, but his limo driver has been replaced with Wilder's. Catwoman retrieves the enabler as well as stealing Dr. Hubbell's fur coat and jewelry. The enabler is returned to the hospital and Brendan is seen trying to learn how to walk again.

Retrieved from "https://heykidscomics.fandom.com/wiki/Catwoman_Vol_2_13?oldid=1548445"
Community content is available under CC-BY-SA unless otherwise noted.