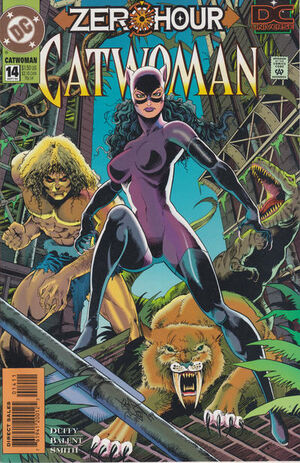 During Zero Hour, Catwoman wakes up in bed next to a Sabre-Toothed Tiger, and finds Gotham City overrun with Dinosaurs and other prehistoric creatures. A private detective is sent by one of her thieving victims to go after her, but the man is replaced by a Caveman from another timeline right before he finds her. Catwoman goes out into the Crisis with Ash the Caveman and Tulik the Sabre-Toothed Tiger. When Tulik is captured by a strange Animal Control that keeps switching eras, Catwoman and Ash give pursuit, and end up having to save him from a displaced hunter on Safari. Looking into a grouping of mirrors, she is bewildered to see many different versions of herself, seemingly from past, future, and even with costumes completely unfamiliar. Seeing the reflection of Ash in the mirror, she notices that he is in reality a handsome young man from the present. As time comes crashing down around them, and the world ends, Catwoman and Ash share a passionate kiss before fading away into nothingness.

Retrieved from "https://heykidscomics.fandom.com/wiki/Catwoman_Vol_2_14?oldid=1417890"
Community content is available under CC-BY-SA unless otherwise noted.