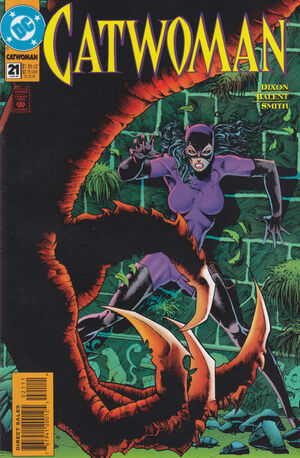 Just goes to show there's more honest ways of making a dishonest living. But I like my style the best.

The Lurker robot leaps after Catwoman and the two children. She pushes them out of the way, and the three of them dive off the top of a high ravine. They land in the mud and look up to see the Lurker poised to heave a large stone at them. The wind and the rain short out the robot's electrical systems and it topples to the ground.

Back at the set, Eppy Collins angrily confronts Matt the director. She mistakenly believes that Matt cast Catwoman in the lead role and smashes him across the face with a whiskey bottle. Enraged, Matt returns to his bungalow and argues with his producer Aram Akkadi. Akkadi loses his patience with Matt and tells him that he is phoning the studio to send in a replacement director.

After Akkadi leaves, Catwoman enters through the window. She learns that Matt does not possess a secret script for They Lurk Below. In fact, he has been making the script up as he goes along. She sits Matt down and forces him to begin writing the remainder of the script. Matt manages to get to his gun and begins shooting at Catwoman. She dives out the window and escapes.

Matt gets into his truck and begins chasing after her. Selina avoids being run down, and Matt's truck drives off the ravine, landing on the destroyed remains of the Lurker robot.

Selina is now faced with the dilemma of handing in a script to her employer Carlos Weinberg. She spends the next three nights writing a script herself. She hands it in and tells Weinberg that it's a Matt Achenbach original. Even in death, Achenbach gets the last laugh however. They Lurk Below becomes a runaway Hollywood hit, and Catwoman can't collect a single dime.

Retrieved from "https://heykidscomics.fandom.com/wiki/Catwoman_Vol_2_21?oldid=1686287"
Community content is available under CC-BY-SA unless otherwise noted.