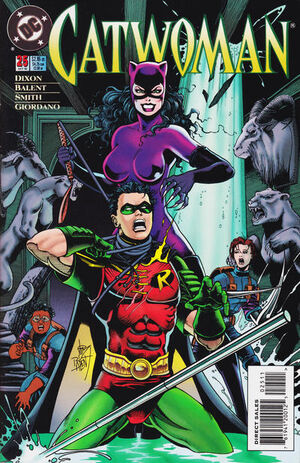 Little birds should stay away from big bad kittycats.

Appearing in "The Crooked House"Edit

Synopsis for "The Crooked House"Edit

Ten years ago, C. Carstairs was not only one of the richest men in the world but probably one of the craziest. His life ends in a plane crash after someone for some reason gave him the controls to the plane. His will leaves nothing of his wealth to his family, instead going into unorthodox and weird trusts. However, over two billion dollars worth of assets are unaccounted for and Catwoman, spying from an adjacent rooftop, believes that said assets may be in his family home in Gotham City. This is her only chance to find out as the city has the building scheduled for demolition in a week. Unknown to her, Robin is staking out the place as well, considering the news of the demolition is enough for anybody to try it out.

Unknown to both Catwoman and Robin, the Psyba-Rats have the same idea. They proceed through the sewers below the building. The team breaks in through the floor and their eyes are greeted to a room, with all its contents are completely upside down. Everyone in the house comes to see more weird things, but nothing of value. A misstep by Catwoman sets off a gigantic rotary phone to be dialed. The call is sent to a man who does not pick it up, but simply gets dressed, grabs a gun, and heads to the building in a cab.

Robin confronts Catwoman and the two start to fight while the mystery man arrives at the place. Meanwhile, the Psyba-Rats come across a vintage Mustang encased in what she believes to be a vacuum. When Razorsharp cuts the glass, tons of mineral oil pours out of the enclosure flooding the room. Catwoman has Robin down when the mystery man shoots at the two. Before he can act, the oil seeps from the ceiling onto the ground floor on top of the man. Everybody having enough of the events of the night decide to leave and forget the whole thing. A week later the news reports that the hidden assets of Biddle were their the whole time in the form of gold bars painted to look like weathered bricks, gold that will eventually go to the government. An enraged Catwoman throws a champagne bottle at the television.

Retrieved from "https://heykidscomics.fandom.com/wiki/Catwoman_Vol_2_25?oldid=1695040"
Community content is available under CC-BY-SA unless otherwise noted.