Part of the 'Underworld Unleashed' event 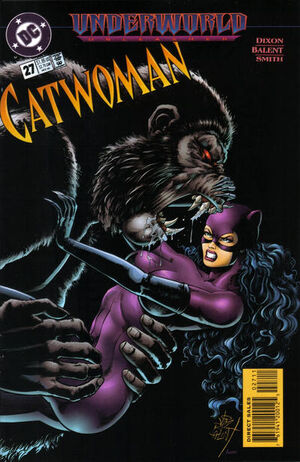 Neron addresses Gorilla Grodd in Gorilla City. In exchange for his immortal soul, Neron offers Grodd the location of the ancient talisman of Arok the Magnificent – architect and first ruler of Gorilla City. With such an item in his possession, Grodd will have legitimate claim to the throne of Gorilla City. King Solovar overhears the bargain and arranges to locate the talisman before Grodd.

Solovar travels to the United States for a secret meeting with Selina Kyle. Disguised in a heavy coat and hat, he offers her an advance payment to find the talisman. He doesn’t tell her about Grodd.

That night, Catwoman tracks the talisman to the American embassy of Mbutovillea. She sneaks past the security alarms, but not past the armed guards. Several men with guns and swords rush towards her, but she manages to avoid their attack. Grodd arrives at the embassy at the same time, and tears through the guards, hoping to find the artifact first. Catwoman and he fight one another, but Selina manages to keep the talisman away from him. She escapes from the building and stalks off into the night. She keeps Solovar’s advance, as well as the talisman of Arok.

Grodd is taken back to Gorilla City where he is imprisoned in the Wild House. Solovar doesn't care that Selina never delivered the talisman to him. He is content knowing that Grodd does not possess it, and without it, he can never claim the throne of Gorilla City.

Retrieved from "https://heykidscomics.fandom.com/wiki/Catwoman_Vol_2_27?oldid=1717023"
Community content is available under CC-BY-SA unless otherwise noted.