Start a Wiki
Part of the 'Catwoman: Lifelines' event 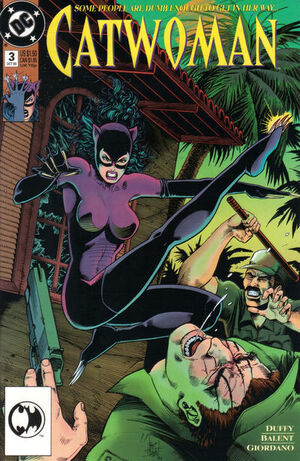 I'm no saint... but sometimes you have to make a stand.

Appearing in "Lifelines, Chapter Three: Shadow of the Cat!"Edit

Synopsis for "Lifelines, Chapter Three: Shadow of the Cat!"Edit

While on Santa Prisca, Catwoman struggles with her own moral inclinations to protect the poor natives from the rich and violent militia, when she would normally consider herself a thief. She happens upon a group of militia soldiers chasing down a citizen who has stolen fruit in order to fight off his daughter's scurvy. She manages to take down the misogynist soldiers, but when she offers to give the victim some vitamin C for his daughter, he mistakes them for drugs and runs away in disgust.

When not in costume, Selina hangs out at a resort for the rich, sunbathing, and fully recognizing the irony of her situation. She calls her partner Leopold, who has remained in Gotham City. Leopold is waiting at the hospital for their acquaintance, a young girl they know as Arizona to be released to her parents, despite their knowledge that she ran away from home in the first place to escape them. When she is released, she seems to be amnesic.

Selina is the guest of a Mr. Quincy Lord, using the cover story that she is seeking out a lover who betrayed her and owes her money. When she relays the news that Bane has been defeated by the Batman, her audience is unsurprised by his return to prison, recounting his history as a boy jailed in his father's stead. The people of Santa Prisca have come to think of Bane as a hero. Selina realizes that there may be more to the attack on her than she thought.

Later, as Catwoman, she attempts to aid the man she met earlier by bringing him a whole bag of stolen fruit. Initially he refuses to accept, but his wife convinces him. In return for the fruit, she asks that they do her one small favour. They introduce her to a man who has heard of Guillermo, the man who made an attempt on her life.

That night, Catwoman finds and tracks Guillermo to an elderly man's estate. The assassin makes an attempt on the man's life, but Catwoman intervenes. He is a fierce fighter, but as she struggles with him, the would-be victim stabs Guillermo in the back, killing him. Suddenly, a number of armed militia men flank them. Catwoman is surprised to discover that they are under the command of the man she saved. He is El Jefe del Pais - the tyrant dictator of Santa Prisca.

Retrieved from "https://heykidscomics.fandom.com/wiki/Catwoman_Vol_2_3?oldid=1417879"
Community content is available under CC-BY-SA unless otherwise noted.