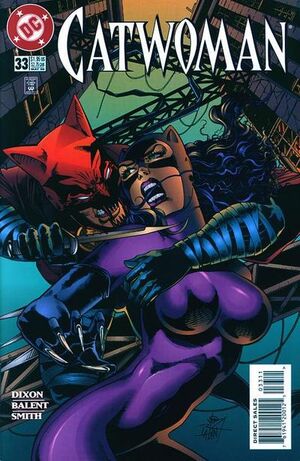 So you want to impress me or hire me or use me in some way. You've got something you want stolen, and I'm the girl for the job.

Appearing in "Devil Does Your Dog Bite"Edit

Synopsis for "Devil Does Your Dog Bite"Edit

Catwoman infiltrates a military base in Rheelasia. She arrives by sea, sneaks from the army and manages to steal a chip that was required for her employees. When she was getting out, she discovered some army men murdered and was suddenly attacked by some ninjas. She knocked down some of them but on her way out she came across with their leader, Hellhound. She avoided a fight with him and she tried to run away from Hellhound and his ninjas. Unlucky for her, she came across with some army men that noticed the events and they started to shoot at Catwoman and Hellhound. On a desperate attempt to escape, Catwoman run towards the sea but just before reaching her destiny, Hellhound threw a blade hitting her on the head and knocking Catwoman down to the water. Hellhound followed her in order to escape the army.

Catwoman woke up in a dark room and was unmasked and her boots, gloves and whip were taken. Hellhound entered the room and let Catwoman outside. She realized that they were in a tanker. When she demanded an explanation a man called the Collector appeared to tell Catwoman that she was needed to do something. When the Collector told her that she was going to be used as a sacrifical lamb, Catwoman grabbed the Collector's middle fingers and broke them. That gave her enough time to try an escape attempt. She jumped to a cabin where some cars were storaged. Using her thieving skills, she started the engine of one of those cars and ran over a couple of ninjas. Before she could harm any more of her captors, they dropped a mechanical shovel over the car and crushed it. Catwoman wasn't hurt but she saw that they were using the mechanical shovel to drop the car into the ocean. Catwoman find herseld helpless and falling towards the sea inside a crushed car.

Retrieved from "https://heykidscomics.fandom.com/wiki/Catwoman_Vol_2_33?oldid=1417909"
Community content is available under CC-BY-SA unless otherwise noted.