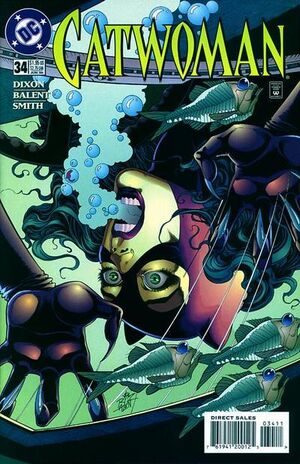 So you want me to steal a big stone wheel that probably weights as much as this ship? I'm not into heavy lifting.

Appearing in "The Razor's Edge"Edit

Synopsis for "The Razor's Edge"Edit

Catwoman finds herself inside of a submerged car. She knew what must be done to get out of the predicament she was in. When she reached the surface, Hellhound and his ninjas take her back to the Collector's ship. She then agrees to listen to the Collector's story and the job he had for her.

The Collector told Catwoman about an ancient wheel hidden deep in some ruins. He wanted her to get inside and find that wheel as there were other powerful people trying to find it. The catch was that the place was full of traps and Catwoman was told to go inside and tell them about the traps when and if she came out alive. Catwoman tried to escape but was soon overpowered by Hellhound and his ninjas. They knocked her down and left her in a cell until they reached their destiny.

Once in mainland, Catwoman was forced into a truck with Hellhound and some of his ninja group. They traveled a long distance into some desert. They untied Catwoman and gave her some clothing for the travel. They meet with a man named Umberto, an ex member of the Order of St. Dumas, that would help them to decipher the text of Eritrius, a kind of guide into the ruins and it's traps.

They arrived to the entrance of the ruins without noticing that they were being watched from afar by the League of Assassins. Catwoman and Umberto were told to enter the ruins while Hellhound and his ninjas waited outside. When Catwoman and Umberto disappeared into the ruins, Hellhound and his ninjas were attacked and many of them were killed. Inside the ruins Catwoman and Umberto tried to avoid activating the first of many traps without luck. They stepped over a trap door that opened at their feet and the two of them were falling through a slide that ended in a razor's edge that would kill both of them if they reached the end.

Retrieved from "https://heykidscomics.fandom.com/wiki/Catwoman_Vol_2_34?oldid=1417910"
Community content is available under CC-BY-SA unless otherwise noted.