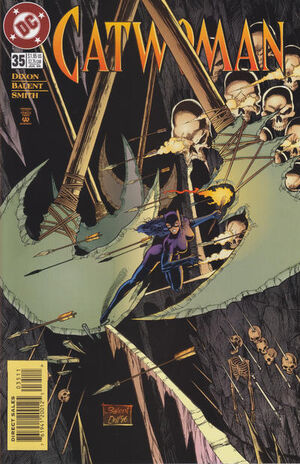 I don't get it. Why's everybody killing themselves to get this wheel?

Appearing in "The Wheel of Plagues"Edit

Synopsis for "The Wheel of Plagues"Edit

Catwoman and Umberto are falling through a slide that ends in a razor's edge. Catwoman uses her retractable claw to save them from a certain death. Umberto lost his guide book and now they must rely on Umberto's memory to recall what traps they would face next. Catwoman's stealth, agility and stamina helps them to reach the Wheel of Plagues without beign killed by the deadly traps. Catwoman notices that the traps are working smoothly even when they're more than a thousand years old. She suspects someone is keeping the place running.

In the surface, Hellhound manages to escape from his attackers and gets inside the ruins to save himself. He manages to reach the wheel by following Catwoman's trail. When he saw the opportunity he knocked Catwoman unconscious and told Umberto to start working to decipher the Wheel's language. Suddenly Hellhound was attacked by what at first looked like a statue but then started to move. The same man attacked Umberto.

Catwoman woke up in a cell and wasn't aware of what happened. She demands an exlplanation and a familiar voice answers her. As she runs to the door to see who his captor is, she is startled to see that her captor is...

Retrieved from "https://heykidscomics.fandom.com/wiki/Catwoman_Vol_2_35?oldid=1417911"
Community content is available under CC-BY-SA unless otherwise noted.