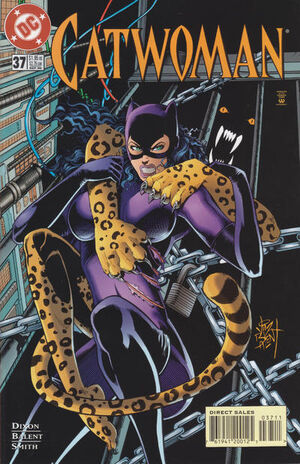 Listen to that big cat howl. Almost like it was--in the room with--us?

Appearing in "Fang and Claw"Edit

Synopsis for "Fang and Claw"Edit

Catwoman sneaked into a building in order to steal a collection of ancient egiptian gold coins with a cat minted on its face. When she grabbed the coins she discovered that she have been lured into a trap when knockout gas came out of the save where the coins were and she fainted almost immediately. When she woke up, she was locked inside of a cage and her boots, gloves and whip were taken. There was some people talking. There was a doctor and his assistant discussing about Catwoman being a simple woman and not a genetic anomaly. She has been drugged and fell asleep again.

The next time she woke up she was still weak and sleepy but she overheard a conversation between a doctor and a woman. They were speaking about an ailment the woman had and a solution that the doctor offered her. Catwoman fell asleep again. The third time she woke up she was feeling better already but a noise caught her attention. The doctor and his assistant were struggling to calm down a leopard. When they finally managed to calm the animal, the doctor took a sample of the animal's blood and used it to create a medicine for the ill woman. The doctor and the assistant went to another room and Catwoman seized the chance to open the lock of her the cage she was in and freed the leopard. She went back to her cage and when the doctor and his assistant returned worried about the woman's reaction to the serum they faced agains a furious leopard. Catwoman slipped away from the scene and headed to the sick woman's room. She locked the door and listened how the leopard attacked her captors outside. She realised that some of that noises were coming from the room she was in. When she turned to see the woman, she faced with a leopard looking beast. She knew that the beast was the woman but that the doctor's experiments mutated her into that beast. Catwoman did her best to avoid the beast's attacks. She then went outside that room and this time she faced against the real leopard. Catwoman decided to let the mutated human out of the room and let the two beasts fight each other.

Catwoman started to look for a way out of the place when she found the doctor's assistant dead body. Later she find the doctor himself and she forced him to give her back her things and the gold coins she was after. The doctor agreed reluctantly. When Catwoman was ready to get out of the place, she and the doctor were cornered by the two beasts that stopped attacking each other and decided to prey on the doctor and Catwoman. The leopard attacked the helpless doctor and the mutant attacked Catwoman. Catwoman used her retractable claw to smash through a window and save herself. The mutant jumped behind her prey but Catwoman grabbed from a ledge and witnessed as the mutant fell right to the water below.

A fulfilled Catwoman admired the golden coins and she then jumped into the night city without looking back to know what happened to the mutant-lady.

Retrieved from "https://heykidscomics.fandom.com/wiki/Catwoman_Vol_2_37?oldid=1417913"
Community content is available under CC-BY-SA unless otherwise noted.