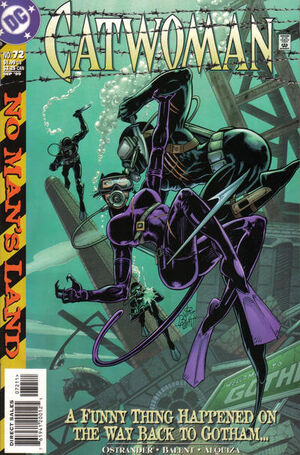 Catwoman learned about a valuable cat-gem on display somewhere in Manhattan. She broke into the building and managed to take the gem, but when she was looking at it, the gem transformed into a communicator and Oracle talked to Catwoman. Oracle told her that she was needed back in Gotham City and that "the boss" would be waiting for her in a certain place. After finishing her message, Oracle's communicator vanished in the air and Catwoman lost her temper as she was already on her way to Gotham when she wa detoured to steal the gem. Her anger outburst triggered the building's alarm and she had to move fast before the police arrived. Batman and Oracle hoped that Catwoman received the message and that she would be on her way to Gotham. Catwoman got outside of the building but the NYPD was already waiting for her. Catwoman used her whip to grab a hold from a passing news helicopter. She forced the two reporters to take her as close to Gotham as possible. Catwoman was furious and determined to make Batman pay for what he did.

In Gotham, a trio of hired henchmen were waiting orders from their employee. Mercy Graves called them and told them to wait in one of the old sewer tunnels of Gotham and gave them orders to kill anybody who walked throught there as it was the only way in and out of the city that wasn't blocked by the United States Government. The trio talked about their previous employees and after having worked for most of Gotham's master criminals, they agreed that they would love to work for Catwoman.

Meanwhile, Catwoman was already on the far side of the Gotham's shore and was planning a way to get in the city. She used a boat to caught the attention of the chopper above Gotham's river. The chopper spotted the boat and as they were reporting it, the boat exploded. Catwoman used the boat as a diversion while she swum under water to reach Gotham. The U.S. Navy sent some divers looking for any suspicious activity and Catwoman managed to fool them. She reached Gotham's shore and she was schocked to see her beloved city completely destroyed and without delay she went to the meeting point Oracle mentioned. On her way she realized how much Gotham had changed and how all of the big players were moving around in the new order.

Catwoman arrived at Robinson Central and found it empty. She called out for Batman and he appeared out of the shadows. Batman told her that he needed her to steal some discs that were somewhere in Manhattan. Catwoman couldn't stand the irony of it and laughed out loud. After that, her anger showed and she was completely indignant at Batman for making her leave Manhattan to go back to Gotham just to tell her to get back to Manhattan as soon as she arrived. Batman explained that he needed to make sure that she received the message face to face and that she was able to get into Gotham, otherwise there was no point at all. Catwoman wouldn't listen to any of it and attacked Batman, who just dodged her attacks with ease. When Batman decided it was enough, he took Catwoman's whip and pulled her towards him. Catwoman found herself on Batman's arms and he just told her how much he needed her before kissing her. At first she was surprised and the kiss was a bit forced, but then both of them yielded to each other and they kissed with a lovers' passion.

After a while, they separated and Catwoman was completely breathless after that, but in a few seconds she recovered and was willing to help Batman. He told her all the information she needed to know to retrieve the discs. Catwoman asked Batman for an alternate route in and out of Gotham and he told her about the old sewer tunnels that he thought were abandoned.

Catwoman went to the tunnels and she found herself against the three henchmen. They fought for a while but after a few moments, the henchman called Mookie, who was a bit unstable, shot at the explosives stashed in boxes and blew the whole tunnel apart. The tunnel was flooded with water and Catwoman and the three henchmen were dragged by the running waters.

Retrieved from "https://heykidscomics.fandom.com/wiki/Catwoman_Vol_2_72?oldid=1503167"
Community content is available under CC-BY-SA unless otherwise noted.