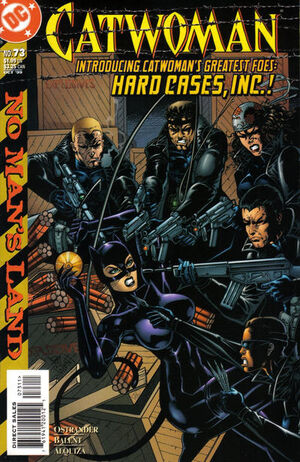 We have received reliable information that the criminal known as Catwoman intends to steal the discs.

Catwoman was trapped in a flooding tunnel and she remembered how did she got there. First, she was contacted by Oracle and called back to Gotham City. She managed to get inside the city and then, Batman told her that he needed a thief to steal some discs in Manhattan and he persuaded Catwoman by kissing her. Catwoman agreed and went into the tunnel Batman said was the only safe way in and out of Gotham, but when she got there she faced three armed men ready to shoot anyone in the tunnel. One of them blew the tunnel with some explosives and the river above the tunnel started flooding the tunnel with Catwoman and the armed men inside.

Catwoman and the men reached the end of the tunnel where the exist was sealed by a floodgate. Catwoman tried to open it but it was completely rusted and needed the help of the other men to finally open the gate. Catwoman and the two men were ejected from the tunnel due to the water's pressure. Once outside Catwoman told the two men that she was going to need a crew for a job and if they turned down, she would hurt them. Al and Lewis agreed and suddenly the third man came out of the tunnel as well. His name was Mookie and Catwoman wanted him in the team.

Catwoman and her new crew traveled to Manhattan and they decided to stay in a fancy hotel. They dressed Mookie as a woman and covered his face. Mookie's character was "Count Agnora", Al and Lewis would be her bodyguards and Catwoman went under the name of Miss Venite, Count Agnora's secretary. When they were in their room, all of them took off their disguises except for Mookie who wanted to stay dressed as a woman because he felt pretty. Selina told the three of them that she was going to be planning the stealing of the discs while taking a bath and that she was not to be disturbed. She looked at the information given by Batman and learned about the security measures under which the discs were being held.

The security crew were called Hardcases Inc. The organization was formed of ex-U.S. Armed Forces with special meta-human abilities. There were five members, each with a unique power and trained in different areas. Selina thought that it might be difficult, but not impossible.

The next day, Selina went to the building were the discs were being held and two of the Hardcases Inc. were waiting for her. She introduced herself as Ileana Goodbody, from Wayne Enterprises. The Hardcases told her that they verified and that there was no record of her at Wayne Ent. Selina told them that she was recently hired and then she asked to see the discs. The leader of the Hardcases, Vin Nastacio, told her that the discs were not to bee seen by anyone except Bruce Wayne. Selina told them that it was exactly what she was expecting to listen. She then informed them that Catwoman might try to steal the discs. Nastacio granted Selina that she was moxie as he already knew that she was in fact Catwoman.

Hardcases Inc. were prepared for any suspicious activity that night and they were posted outside the building in case Catwoman appeared. Catwoman's plan started when Al used a missile launcher from a nearby building to attack the posts where the Hardcases were at. Then a chopper piloted by Lewis hovered over the building and dropped a number of street gang members that attacked the stunned Hardcases. The chopper was damaged by bullet shots and Lewis moved out of the scene leaving the street gangs to be masscred by the Hardcases. Then out of nowhere, a figure of a cat lady appeared at the scene but before the Hardcases could attack, it was revealed that it was Mookie disguised as Catwoman with a lot of explosives attached to his body. The bombs exploded and the three Hardcases on the scene were knocked for a while. At that moment, the real Catwoman entered the vault where the discs were held and knocked the Hardcase guarding it. She took the discs and moved out. Nastacio watched it all from the security room and decided to get out and help his crew on the rooftop. The Hardcases managed to control the street gangs until the New York City Police Department arrived and took them all away. Al, Lewis, Mookie and Catwoman were nowhere to be found.

Back in their headquarters, Nastacio explained them that he switched the discs in the vault with some fake ones, so when he saw Catwoman taking the ones in the vault he knew his plan worked. The man called Duster, part of the Hardcases had the ability to know an object's history just by touching it. Nastacio gave him the original discs but Duster told him that those were not the originals. Duster told him that Catwoman outguessed Nastacio's plan and when he went out to help his crew, Catwoman switched the fake discs from the vault with the originals. Nastacio was determined to find Catwoman and take the discs back while making her pay.

Retrieved from "https://heykidscomics.fandom.com/wiki/Catwoman_Vol_2_73?oldid=1417949"
Community content is available under CC-BY-SA unless otherwise noted.