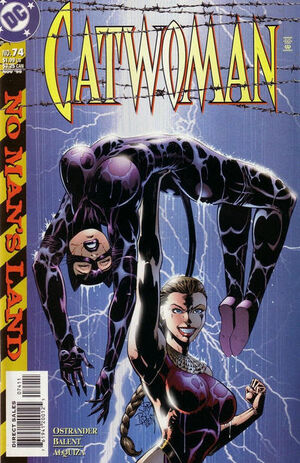 Money itself is valueless. It simply represents the ability to obtain that which is valuable--food, housing, gold, diamonds and so on.

Appearing in "A Slight Detour"Edit

Synopsis for "A Slight Detour"Edit

Catwoman showed her the stolen discs to Al and Lewis and told them that she would start bidding them for sale. Al and Lewis were mad at Catwoman for letting Mookie sacrifice himself. However, Catwoman showed them that Mookie was alive and fine resting in the room of the hotel they were staying. Catwoman told them that Mookie had some kind of supernatural power that allowed him to stand harmless after explosions and bullet shots. Mookie was high after the feeling and Catwoman realized that Mookie liked the feeling of explosions.

In Gotham City, Oracle and Batman learned of Catwoman's feat on stealing the discs. Oracle was worried and didn't trust Catwoman after she murdered Selina Kyle. Batman knew the truth behind that story but he didn't told so to Oracle. Instead he came up with possible scenarios in which Catwoman never killed Selina Kyle. A few moments later, Oracle realized that Catwoman was offering the discs to the highest bidder on internet. Batman wasn't surprised at all.

Elsewhere, Mercy Graves contacted her employer and notified him of the bidding. She was told to buy those discs at any cost. Maxi Zeus was also interested in having the discs and he planned to steal them from Catwoman. At their headquarters, the Hardcases, Inc., were using her abilities to learn of Catwoman's next step and they learned that she was going to make the exchange of the discs at the top of the World Trade Center.

Catwoman and her crew were in fact at the World Trade Center and she told her crew to stay there until she calls them to the other building. Catwoman left them and one of the guys was thinking that he and Catwoman might have a chance of dating. At that moment, Maxie Zeus and his people arrived at the place and attacked them. Mookie was standing there and was hit by all the bullets but he wasn't harmed. A few seconds later, the Hardcases arrived as well and a fight between them and Zeus' people started. The Hardcases overpowered Zeus'crew. When it was all said and done, the New York City Police Department apprehended all the people including Catwoman's crew. The Hardcases looked for the discs but they found a tape instead. It was a recording of Catwoman telling them that they went straight for the bait and that she was going to exchange the real discs somewhere near the Brooklyn Bridge.

Catwoman and Mercy were already at the meeting point and exchanged the packages. Catwoman opened up the case Mercy gave her and a blast of phosphorus made her blind and Mercy seized the chance to attack Catwoman. Using her whip, Catwoman managed to move Mercy's aim and saved herself from the bullet shot. The Hardcases arrived and tried to stop Mercy and recover the discs. The combined forces of the Hardcases were no match to Mercy Graves, who took them all down without breaking a sweat. Catwoman was still blinded and tried to move herself out of the danger zone but she was shot by Mercy. The bullet grazed her body but it wounded her and then Catwoman fell to the river. Mercy escaped in her car with the discs despite the Hardcases' leader trying to stop her. Mercy called her employer and told him that she got the discs but that Catwoman survived. Mercy was told not to worry for that as now they have more important matters to deal with.

Retrieved from "https://heykidscomics.fandom.com/wiki/Catwoman_Vol_2_74?oldid=1417950"
Community content is available under CC-BY-SA unless otherwise noted.