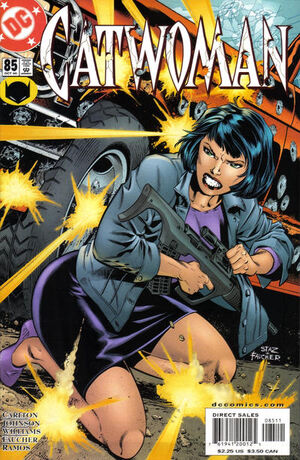 Appearing in "The Cat Came Back"Edit

Synopsis for "The Cat Came Back"Edit

Ever since her kidnapping of Commissioner Gordon, Catwoman has noticed the increased presence of police activity in the nice “Dee Zee” neighborhoods. The police, coupled with her assurance of Harley Quinn eventually heading her way, drive Catwoman to search for a new apartment and to get “some kind of weapon”. Newly promoted detective Dylan Kelly and newly assigned detective Sybilla Costas, who many on the GCPD force believe is a witch, are assigned to investigate the kidnapping of Gordon and the arresting of Catwoman. An unknown woman, disguised as a cleaning lady, spies on Gordon’s office and learns that Kelly and Costas are after “her”. Meanwhile, Catwoman, in “another disguise”, rents an apartment in a less affluent part of town and buys an address on where she can get a weapon. At “Gigo’s Auto Repair”, she becomes embroiled in a gunfight involving an ex-Marine named The Banner and a pusher/singer named Fluffy. Catwoman is shot in her arm, but steals Fluffy’s car and an automatic and flees the scene. In a cyber coffee shop, Costas uses tarot cards, via a computer program, to get a lead on Catwoman. She asks Kelly if he remembers a woman named Selina Kyle. Kelly remembers her as a business woman who ran for mayor of New York but who is now dead. Costas states Kyle is not just dead, she vanished, records destroyed, and that someone seems to have gone to a lot of trouble to wipe out any trace of her. Costas also states she has found a birth certificate, one belonging to “another Kyle girl”, a sister she thinks. Though not sure of the connection between Selina Kyle and Catwoman, the detectives agree it could be a lead worth tracking down; while a café waitress, listening in, seems very interested in the detectives’ conversation.

Retrieved from "https://heykidscomics.fandom.com/wiki/Catwoman_Vol_2_85?oldid=1417961"
Community content is available under CC-BY-SA unless otherwise noted.