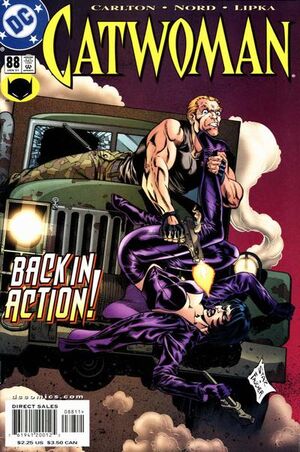 Even though not disguised as she was when she stole a gun from “Gigo’s Auto Repair”,[1] Catwoman returns aforementioned gun to El Estandarte and asks instead for explosives. She is told to return on Friday and leaves while being watched by a figure hidden in the shadows. Mayor Dickerson is ending a meeting with Captain Rossetti, who has come to ask for a favor in directing the governor’s investigation into inmate killings [2] to Director Norsing, when Commissoner Gordon arrives for his appointment. The mayor tells Gordon to “leave Catwoman alone” and redirect all resources to catching the lunatic that shot up Fluffy Meek’s funeral. Later, after lunch with his daughter Barbara, Gordon returns to GCPD and is shown to an old woman named Maria who is wearing Catwoman’s old purple costume. Maria claims a “stupid Dee Zee woman” threw out the costume [3] along with lots of other clothes. Gordon has Maria referred to the appropriate shelter services and turns his attention to detectives McNeely and Montoya. The Commissioner takes the detectives off the Catwoman case, stating they have plenty more on their plate. The detectives, instead, decide to follow up on Maria and see if she can identify the woman who threw away the Catwoman costume from a photo lineup that includes a picture of Selina Kyle. Outside GCPD, detective Marchak and his partner learn of a plot by the Original Children (a group who was hired as protection at Meek’s funeral) to hijack an explosives truck to “blow up cops til they get the one shot up Fluffy Meek’s funeral”. Marchak and a group of SWAT try to stop the jacking, but are hindered by the arrival of Catwoman and The Banner, who is driving the explosives truck. Catwoman takes out Marchak as the only remaining members of the Original Children are arrested and The Banner speeds off with the explosives. Later, Catwoman calls the mayor and tells him she thought she made it clear she wanted him to call off the cops and Gordon. The mayor assures her the explosives truck job had nothing to do with her, but Catwoman states that that is not what the mayor’s “goon” said and tells his honor to look out the window as his car explodes.)

Apparently the purple jumpsuit costume is one of a few as Catwoman returns to the costume in Batman # 587, when she watches Gordon get shot.

Retrieved from "https://heykidscomics.fandom.com/wiki/Catwoman_Vol_2_88?oldid=1417964"
Community content is available under CC-BY-SA unless otherwise noted.