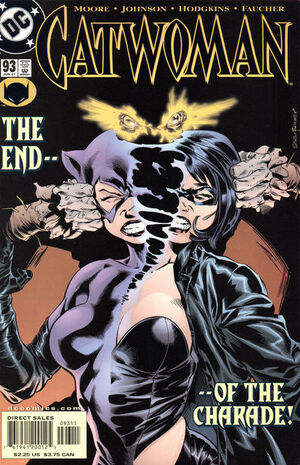 Appearing in "Fear is Here to Stay"Edit

Synopsis for "Fear is Here to Stay"Edit

Catwoman intercepts a prison van returning Jonathan Crane (a.k.a. the Scarecrow) to Arkham Asylum, freeing him from his handlers. Once alone with Crane, Catwoman threatens him for messing with her mind months ago (Catwoman # 58-60), a situation that has caused Catwoman to frequently black out and assume a separate personality. However, unknown to Catwoman, Crane left some post hypnotic suggestions that he now uses to free himself from her clutches and flees before the approaching sirens arrive. Detectives Marchak and Belivell tell Gotham’s Mayor they have been unsuccessful in tracking down Catwoman, who had stolen the mayor’s payoff money from a man named Valmont last issue. After her battle with Crane, Selina Kyle, under the assumed named of Cassandra Winters, books a flight to Hong Kong, stating she has to get out of Gotham. However, while Crane begins creating more of his fear gas, Selina instead returns to “Little Cuba” in Gotham, goes to a gym, and spars with a boxer named Reyes. Later Selina visits the Penguin at his club, The Iceberg Lounge, and makes a trade with Cobblepot; a rare bird in exchange for a set up between Crane and the mayor. When that meeting happens, Selina arrives and, though temporarily affect by the Scarecrow’s fear gas, defeats Crane before the police arrive to take him away. Selina returns to the gym in “Little Cuba” and questions the owner about when one knows it is time to walk away and what happens if what they do is all they know. His reply...”Then you’re in trouble.”

Selina gives the Penguin the photographs and negatives of the mayor’s wife, originally in the possession of Jamal “Fluffy” Meeks.

Retrieved from "https://heykidscomics.fandom.com/wiki/Catwoman_Vol_2_93?oldid=1417969"
Community content is available under CC-BY-SA unless otherwise noted.