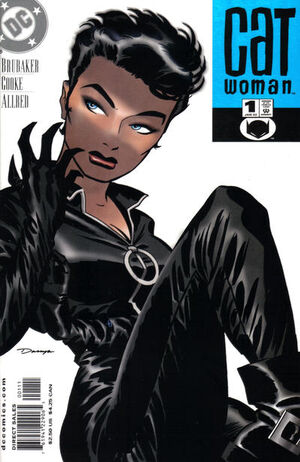 Appearing in "Anodyne, Part One of Four"Edit

Synopsis for "Anodyne, Part One of Four"Edit

Selina Kyle hasn't put on the cat suit for six months. She encounters Batman while apprehending the Riddler still out of costume. She hits one of his thugs with a brick when he attempts to shoot Batman from behind and disappears. Later, she dresses up for a night on the rooftops. She has a brief discussion with Batman about the help gave him the previous day. He asks her what he can expect from her now and she says that he'll just have to take a wait and see attitude. She thanks him for referring her to a psychologist. He says he helped because he believes deep down she is a good person. After Selina returns to her safehouse, a friend from her prostitute days tries to pick the lock on the door. She tells Selina that the streets aren't safe as someone is murdering prostitutes.

Retrieved from "https://heykidscomics.fandom.com/wiki/Catwoman_Vol_3_1?oldid=1417972"
Community content is available under CC-BY-SA unless otherwise noted.