Part of the 'Salvation Run' event 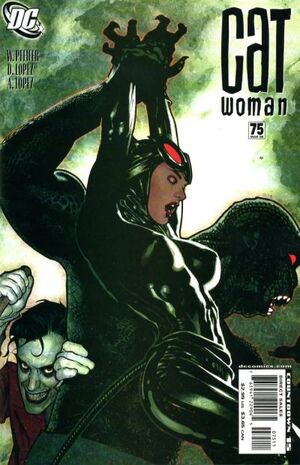 After a quick recap of Catwoman's deportation to Salvation from Salvation Run #2, Catwoman, Lex Luthor, Deadshot, Chemo, Cheetah, Blockbuster III and Bane are disoriented and alone together on Salvation in the twilight. After Catwoman gets in scraps successively with Deadshot and then Cheetah, she slinks off from the group to take her chances, rather than have to deal with the rest of them.
She spies the Rogues in the middle of the woods around a campfire, but is then captured by Killer Croc, who hands her over to the Joker. Instead of the expected violence, the Joker instead flirts with her and offers her a cigar. She headbutts him, and leaves to be by herself while he's still laughing at his own joke. She is soon found by Cheetah, Chemo and Blockbuster III, sent by Luthor to bring her back.
Luthor has found a hatch in the planet that he wants Catwoman and Cheetah to break into, Catwoman as the burglar, Cheetah as her protection. The two of them find their way into an underground chamber filled with strange machines with strange symbols on them. Via communicator, Luthor directs them to what he believes to be the most important machine, based on his newfound rudimentary understanding of the planet's written language. In a rush to get out, upon hearing which machine they're looking for, Cheetah rushes over to it, shoves Catwoman and turns it on.
Bright lights go off everywhere, and mist starts to pour into the room. An overhead tunnel opens up, and Cheetah climbs up into it, despite Catwoman's warnings. There's a large, blinding flash of light, and Catwoman finds herself alone again, lying down in a Gotham City street. After her initial relief, she hears a voice behind her and turns to find an unfamiliar Batman pointing a gun at her head, and asking if she thought he would let her get away with the murder of Black Mask.

Retrieved from "https://heykidscomics.fandom.com/wiki/Catwoman_Vol_3_75?oldid=1418047"
Community content is available under CC-BY-SA unless otherwise noted.