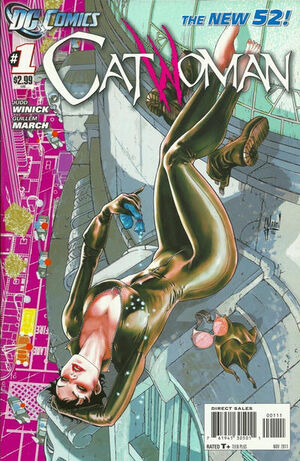 Appearing in "...and most of the costumes stay on..."Edit

Meet Catwoman. She’s addicted to the night. Addicted to shiny objects. Addicted to Batman. Most of all, Catwoman is addicted to danger. She can’t help herself, and the truth is – she doesn’t want to. She’s good at being bad, and very bad at being good. Find out more about what makes Catwoman tick in this new series from writer Judd Winick (BATMAN: UNDER THE HOOD) and artist Guillem March (GOTHAM CITY SIRENS)!

Retrieved from "https://heykidscomics.fandom.com/wiki/Catwoman_Vol_4_1?oldid=1661904"
Community content is available under CC-BY-SA unless otherwise noted.